What not to do: how to encourage staff focus to drive productivity

Organisations are moving away from telling people what to do and focusing on combining clear purpose with autonomy to increase productivity. This seems like a great recipe for success and it is, but there’s a challenge with autonomy. How to stop people using the wrong behaviours or focusing on the wrong areas – without telling them what to do.

Well, here’s a novel approach: don’t tell people what to do, but do tell them what not to do. Combine that with clear purpose and autonomy and you’ll be driving productivity. 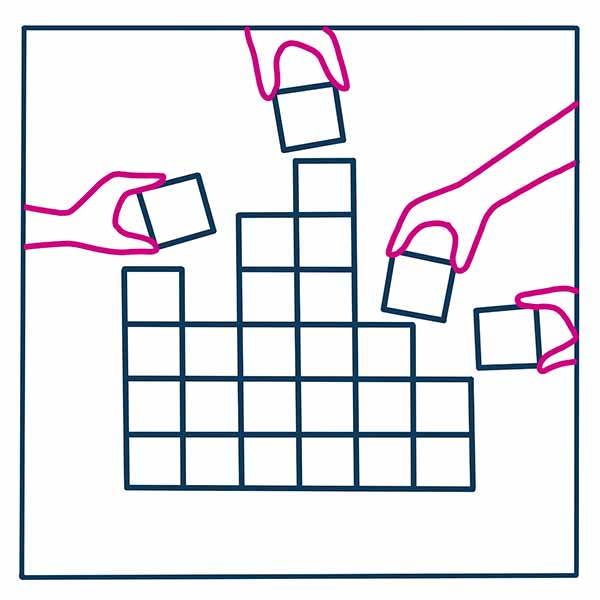 Why organisations tell people what to do

Which leads to the question: how do you get lots of very different people to all pull in the same direction?

Getting it right separates successful organisations from their unsuccessful counterparts. When everyone pulls in the same direction, the organisation achieves its goals. But this doesn’t happen automatically. And the easiest way to get lots of different people to do certain things in a specific way is to tell them what to do and how to do it.

And yet, this only works well for certain types of work, such as factory manufacturing lines. This type of work is synonymous with the industrial revolution when scientific management – which includes telling people what to do to eliminate waste – came into being. But for several reasons, this idea of telling people what to do is much less popular than it used to be.

Organisations are stopping telling people what to do, but why?

Well, work is changing or it already changed! The number of variables that lead to success have multiplied. Front and center sits human relationships, managing these wrong is paramount to failure. And it’s not always obvious what success looks like in the short or medium-term.

Secondly, as we understand more about human psychology and the nature of relationships at work, there are other reasons why organisations are stopping telling people what to do.
Let’s take a look at them.

Your biases affect their success

When you tell someone what to do, their success becomes sensitive to your worldview and your biases. You may be unable to work with a particular person at work, so you instinctively tell a colleague to work round this person, even though working with this person may be the quickest route to success.

And since everyone has different strengths, while the approach you suggest works for you it might be incompatible with your colleague’s strengths. Sometimes the best approach is one that plays to someone’s strengths, even if on the surface it seems less effective. But this is something only the individual can decide.

When people are motivated, they tend to use their strengths to innovate and find new ways for your organisation to succeed. That’s the great thing about organisations being collections of people: you have a huge amount of diversity to draw from in the quest for success. But you don’t tap into it by telling people what to do.

Innovation isn’t just for your R&D department. Everyone has to innovate to stay ahead in today’s fast-paced world. And with innovation, the path to success is unpredictable. Often we innovate without realising it, when doing something unrelated to the task at hand. With that in mind, how can we expect to tell people how to innovate?

If people are told what to do then we remove that part of their day where they problem solve. And problem solving is the precursor to innovating

The winding path to greater autonomy

For all these reasons, organisations are increasingly stepping back from the how side of telling people what to do. They’re being very clear about what to achieve – using things like purpose, values, vision and mission statements – and then letting their people step up to plate to achieve goals in ways that suit their strengths and outlook.

This is the rise of autonomy. As a society we have been on a path to realising the power of people and the importance of the individual and the team in achieving success and our organisations are now following suit. Letting people take responsibility and play to their strengths is a winning formula.

Autonomy increases wellbeing but it also gives human creativity and diversity a chance to produce better results than could be achieved by being prescriptive. Combining clear values with clear purpose and a healthy dose of autonomy is a powerful recipe for success.

Dealing with autonomy’s dark side

Autonomy does, however, give rise to a challenge: ‘If I give people autonomy on this, how do I know they won’t do the wrong thing?’

Because of course, there is a wrong way to do certain things. Certain behaviours aren’t acceptable at work and these may differ based on the organisation. They may even differ based on particular projects or people.

Plus there are task-specific, wrong ways to do things because you know they’d negatively impact the finished product or make future work harder.There are tangents that people may go down due to personal interest or lack of knowledge and this leads to inefficiency and ineffectiveness, both things that all organisations try to avoid.

So we need to stop people doing the wrong thing. But we need to maintain the high degree of autonomy that is empowering to both wellbeing and productivity. And we need to do both of these things without telling people what to do.

Be clear on what you shouldn’t do

Visioning is a useful technique. Overall, it’s a healthy leadership behaviour designed to bring the future to life, so people are motivated by – and understand – what they are working towards. But visioning can also be used to help them understand why certain behaviours or methods are not ideal.

From the strategic to the specific

It’s useful to separate out ‘what not to do’ into two areas: firstly, the strategic or organisation-wide level, which gives a useful set of guidelines for individuals to judge potential courses of action or behaviours against. Secondly, project or task-specific guidelines which provide the necessary granularity and context for this to succeed in day-to-day life.

At the strategic level, you’ll often see ‘what not to do’ brought to life in a series of statements:

You can’t have hundreds of these, so seeing them at a glance gives people a good steer on what the organisation considers important. But these are not granular enough for specific tasks. Let’s take the point above about not ‘focusing on too many things at once.” What counts as ‘too many’ is contextual: some projects will require multitasking, for example.

Leaders should be clear what is not acceptable on a project-by-project or task basis. This is easier than it sounds because it doesn’t have to be personal: it’s not about the people involved in the project but about the project itself, which will be subject to unique forces and therefore require specific behaviours to succeed.

Think about a recent project you ran with a team: what behaviours or actions would have been particularly detrimental to success which would have been fine on another project? This type of thinking not only helps you be clearer with people around what not to do, but also helps you develop project plans and roadmaps for success.

Telling people what not to do is easier if you invest in building trust with your staff. Find out how today.